The initial response and usage of my scdebugger.com tool has been fantastic! I am glad to see this service provide real value to those implementing SiteCatalyst on various platforms. While scdebugger.com was originally designed for implementations on Digital Home devices, this tool can benefit developers for any platform, including standard web implementations! Today, I am excited to announce two awesome new features for this services: XML debugging support and in-browser SDR mapping!

The most recent update to the service has added support for both the collection and debugging of Data Insertion API calls sent via XML-formatted HTTP POST requests. Before today, we only had a simple manual debugging tool for XML requests (which is still available here), but now the service as a whole has been configured to accept XML beacons sent directly to scdebugger.com via POST. 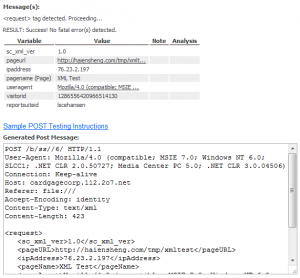 Additionally, there were a lot of folks who wanted to attach context or associate notes with specific variables from their implementation, but the previous method of generating an SDR mapping CSV file in Excel and then uploading it was a bit too cumbersome for the average user. So I went ahead and added AJAX updating support on the actual Data Beacon Analysis pages.  Now every friendly name and note for every variable can be directly edited or added (by clicking the ‘+’ icon) on the webpage itself!

But wait, there’s more! Some variables in your requests might not make any sense to you whatsoever, so now scdebugger will try to provide contextual data about the variable where no friendly name has been specified. For example, you might see a variable called AQB in some or all of your debugging image requests, but you have no idea what it means. The scdebugger service would then analyze it and recognize that variable as a marker to indicate the beginning of a data beacon. Pretty cool, eh?

For those of you who haven’t used the tool yet but still want to get a feel for how this system works, you can check out and play with some fake requests here. 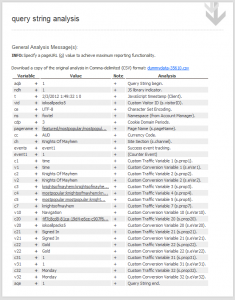 I also hope to post a tutorial soon that will show you how to debug production implementations on platforms that support proxy manipulation or packet capturing. In the meantime, enjoy scdebugger.com!