And not long after my last post on video games and western culture, we see this awesome follow-up video from NFL Pro player Chris Kluwe, known for his punting skills for the Vikings, echoing and emphasizing many of the same points on gaming culture. Enjoy!

END_OF_DOCUMENT_TOKEN_TO_BE_REPLACED

Making it to Gold III

In League of Legends, after you’ve progressed your account to the maximum level 30, you have the opportunity to play in the Ranked matchmaking system. In this system, you gain and lose various points depending on the skill level of your opponents and the outcome of your game against them. The players in ranked matchmaking are divided out into six separate tiers of players: Bronze, Silver, Gold, Platinum, Diamond, and Challenger. Each tier contains five divisions to help separate out the ~1 million players that are in the ranked system. So I am one game away from making it into the third division of the Gold tier, and it’s an exciting feeling. But until recently, I never realized what that means. Then I found this set of compiled statistics that shows me how I compare to other players (I was pleasantly surprised!):

END_OF_DOCUMENT_TOKEN_TO_BE_REPLACED 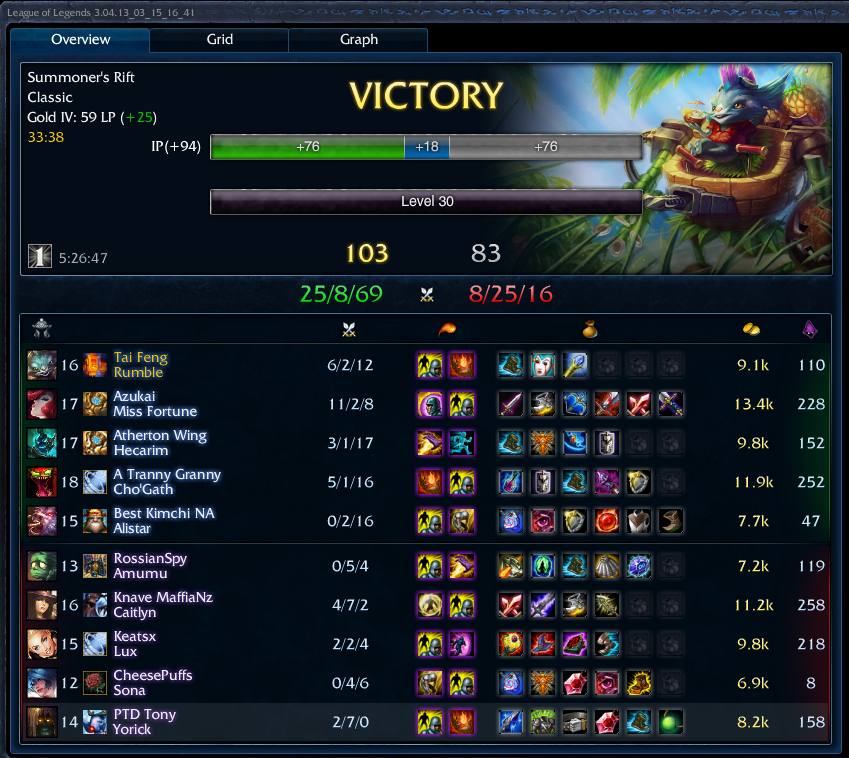 At the end of Season 3 in the After Hours Gaming League, the second division in the League of Legends B-League was faced with quite the conundrum: a five-way tie in win/loss ratios (4-6 for the curious). Unfortunately, with the playoffs scheduled to take place the very next week, the event organizers and teams did not have the time to play tiebreaker matches since all these folks have full-time day jobs to worry about. So what is a quick way to sort out the few teams that will be able to go on to the playoffs from those that won’t? Co-op vs AI speed runs, of course!